Question A.1
A gland having endocrine as well as exocrine function

(d) adrenal
Solution A.1
(c) pancreas
Question A.2
Exophthalmic goiter is caused due to the overactivity of

(d) adrenal cortex
Solution A.2
(b) thyroid
Question A.3

The deficiency of ADH causes:

(a) The hormone produced by adrenal medulla.

(b) The condition caused by the over secretion of insulin.

(c) The hormone secreted by beta cells of the islets of Langerhans.

(d) The interconnection between the two lobes of thyroid gland (technical term).

(e) The hormone whose under secretion causes more urine formation.

(f) The hormone which stimulates the entire sympathetic nervous system.

Question B.2
What would a child suffer from, if there was hypo secretion from his thyroid?
Solution B.2
If there was hyposecretion of the thyroid gland in a child; the child will suffer from cretinism. The symptoms of cretinism are dwarfism, mental retardation, etc.
Question B.3
Choose the odd one out from each series:

Match the conditions in column A with the cause in column B.

Solution B.4
Question B.5

Identify the odd one in each of the following and mention what the rest are:

Reason- Larynx is the sound box while the rest three i.e. glucagon; testosterone and prolactin are hormones.

Reason - Penicillin is an antibiotic while adrenaline; insulin; thyroxine are hormones.

Reason - Adrenaline is a hormone while the stomach, ileum and liver are the organs of the digestive system.

Solution B.6
Question B.7

Given below are group of terms. In each group the first pair indicates the relationship between the two terms. Suggest the suitable word(s) for the fourth place.

Mention the name of diseases based on the clues/ symptoms given below:

(a) Urine is loaded with sugar.

(b) Swelling in the neck.

(e) Excessive growth of bones in the face, hands and feet.

e) Acromegaly in adults and gigantism in children

Write the exact location of each of the following glands:

(a) Thyroid: It is situated in the front part of the neck just below the larynx.

(b) Adrenal: It is present as a cap on the top of each kidney.

(c) Pancreas: It is located behind the stomach in the upper left abdomen.

(d) Pituitary: It hangs from the base of the mid-brain below the hypothalamus.

(a) Three hormones secreted from islets of Langerhans of pancreas.

(b) Two types of cortical hormones.

(a) Three hormones secreted from islets of Langerhans of pancreas:

(b) Two types of cortical hormones:

Write the main function of each of the following hormones.

Name the hormones responsible for the given functions.

Solution C.5
Question C.6
If you stand to make your maiden speech before a large audience, your mouth dries up and heart rate increases. What brings about these changes?
Solution C.6
Adrenaline is the hormone which prepares the body to meet any emergency situation. Adrenaline makes the heart beat faster. At the same time, it stimulates the constriction of the arterioles of the digestive system reducing the blood supply of the digestive system which makes the mouth dry.
Question C.7

Given below is a table designed to give the names of the glands, the hormones produced, their chief functions, the effects of over secretion and under secretion in respect of thyroid, pituitary and pancreas. Fill up the blanks 1-13.

Complete the following table by filling in the blanks numbered 1 to 7.

Complete the following table by filling in the blank spaces numbered 1 to 8.

(a) Endocrine system: Endocrine system consists of several endocrine glands/glandular cells which activate each other and work as a system to bring about chemical coordination in the body.

(b) Hormones: Hormones are secretions from specific cells or glands in the body, which are carried to all body parts through the blood, but exert their effect only on one or more specific body parts (target organ or cells).

(c) Myxoedema: Myxoedema is a condition which occurs in adults due to hypothyroidism in which the person becomes sluggish with swelling of the face and hands.

Distinguish between the following pairs:

(a) Exocrine and endocrine glands (manner of secretion)

(b) Enzymes and hormones (chemical composition and mode of action)

(d) Diabetes mellitus and diabetes insipidus (cause and symptoms)

(e) Addison's disease and Cushing's syndrome (cause and sugar level)

(a) Differences between exocrine and endocrine glands (manner of secretion):

(b) Differences between enzymes and hormones (chemical composition and mode of action):

(d) Differences between diabetes mellitus and diabetes insipidus (cause and symptoms):

(e) Differences between Addison's disease and Cushing's syndrome (cause and sugar level):

(a) Adrenaline is often described as the emergency hormone.

(b) Pituitary is popularly called as the master gland.

(d) Simple goitre can be prevented by using iodised salt in food.

(a) Adrenaline is often described as the emergency hormone because it prepares the body to meet any emergency situation, for fight and face the danger or flight and run away from it. More adrenaline is secreted which makes the heart beat faster, increases the breathing, releases more glucose into the blood stream to fulfill the energy requirement.

(b) Pituitary is popularly called as the master gland because it controls the functioning of all the other endocrine glands.

(c) People living in the low Himalayan hilly regions often suffer from goitre because iodine is deficient in soil and hence, in the food grown there. Insufficient iodine produces less thyroxine which results in goitre.

(d) Iodised salt contains iodine which is an active ingredient in the production of thyroxine. Hence, it is recommended to use iodised salt in food to prevent simple goitre.

Do you agree with the statement- "All hormones are chemical signals"? Yes/No. Justify your answer.

Chemically hormones are peptides, amines or steroids. They are involved in regulating the metabolism of the body. They can bring about specific chemical changes during metabolic process. Therefore hormones can be termed as 'chemical messengers'.

Study the diagram given below and then answer the questions that follow:

a. Name the cells of the pancreas that produce (1) glucagon (2) insulin.

c. Why is the pancreas referred to as an exo-endocrine gland?

d. Why is insulin not given orally but is injected into the body?

e. What is the technical term for the cells of the pancreas that produce endocrine hormones?

f. Where in the body is the pancreas located?

a. Glucagon: Alpha cells of the islets of Langerhans

Insulin: Beta cells of the islets of Langerhans

b. Insulin: It maintains the levels of glucose (sugar) in the blood.

Glucagon: It raises the blood glucose levels by stimulating the breakdown of glycogen to glucose in the liver.

d. Insulin is not administered orally because the digestive juices degrade insulin, and thus the insulin is ineffective in the body.

f. The pancreas is located in the abdomen behind the stomach.

Given below is a portion from the human body showing some important structure in ventral (front) view. 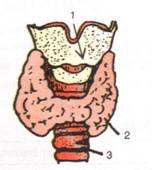 (a) Where is this portion located in the body?

(b) Name the structures numbered 1-3.

(c) State one main function of each of the structures named above.

(d) Is there any duct to carry the secretions from the structure numbered 2? If so, give its name.

(a) This portion is located in the neck region above the sternum.

Thyroid gland produces thyroxine and calcitonin which are essential hormones.

Trachea is the wind pipe that helps in passing air to and from the respiratory system while breathing.

(d) Structure 2 is the thyroid gland. It is an endocrine gland, so it is ductless and pours its secretions directly into the blood. Hence, there is no duct.

Given below is an outline diagram of human body showing position of certain organs. 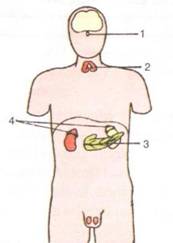 (b) What is common to all these parts in regard to the nature of their functions?

(c) Name the nutrient element which is essential for the normal working of part 2.

(b) All the glands shown in the above diagram are endocrine glands. They secrete essential hormones and pour their secretions directly into the blood.

(c) Iodine is essential for the normal working of thyroxine.

Given below are two diagrams (one is correct, the other one is somewhat incorrect) showing the transport of a hormone from its source gland/cell to the target organ/cell.

(b) Hormone secreted by the endocrine gland is shown in the image A to be moving only in one direction i.e. towards the target organ. But actually the hormones poured into the blood stream may have one or more target sites at a time. The arrows shown are carried to all parts by the blood and their effect is produced only in one or more specific parts.

Compare the hormonal response with the nervous response with respect to their speed, transmission and general nature of changes brought about.

Mention three important differences between the action of hormones and that of nerves in the regulatory mechanism of our body.