Become our
Academic Partner
or own an
Education Franchise
×

Who proposed the Theory of Evolution? How was Neanderthal man’s locomotion different from Modern man’s locomotion? Revise textbook questions with the support of Selina Solutions for ICSE Class 10 Biology Chapter 14 Human Evolution. All these solutions can be accessed at TopperLearning 24/7 as many times as you need to get your chapter concepts right.

One of the important topics discussed in the Biology solutions is Darwin’s Theory of Natural Selection. Revisit this topic and the other critical ones from this chapter with our ICSE Class 10 revision notes and video lessons.

The first scientist who proposed his theory for evolution was

The theory of Natural Selection was proposed by

The organism studied for industrial melanism was a

The range of cranial capacities in the following ancestral forms were

Solution B.2
Question B.3

Mention the two principles through which Lamarck explained his ideas.

Parts of the body which are used extensively become larger and stronger, while those which are not used deteriorate.

(b) Inheritance of acquired characters:

An organism could pass its modifications to its offspring.

Give the scientific name of the organism which is cited as the classical example of 'natural selection'.

Biston betularia is a classical example of 'natural selection'.

Tick mark (√) the correct option in the following statements.

(a) The fossil history of humans is complete/fragmentary.

(b) The first remarkable human fossil was that of H. habilis/H. africanus.

(c) Evolution is an ever continuing/promptly ending process.

(b)The first remarkable human fossil was that of Homo habilis.

(c)Evolution is an ever continuing process.

Briefly discuss the Theory of Natural Selection as given by Darwin.

Charles Darwin proposed the idea of natural selection. Darwinism or Theory of Natural Selection is based on some facts:

How would you justify that Australopithecus was a human ancestor?

Australopithecus averaged about 120 cm tall, and the cranial capacity ranged from 450-600 cm3. It had a low forehead, protruding face, lack of chin and low brain capacity. Teeth resembled man because the dental arc was a smoothly rounded parabola, and a simian gap was absent which justifies a human ancestor.

Name the six ancestral forms in their correct sequence through which modern man has evolved.

- Use and disuse of body parts

Explain the occurrence of vestigial organs on the basis of Lamarck's theory of use and disuse.

Organs which are found in reduced or rudimentary condition and do not perform any function in the possessor are called vestigial organs or non-functional organs. They help in understanding the history of evolution and continuity of life.

1. Wisdom teeth: They are the last molars which appear last at the age of 17-20 years.

2. Vermiform appendix: It projects from the blind end of the caecum and is a functionless organ in humans. It is helpful in herbivorous mammals.

3. Pinna: It is the lobe-like part of the external ear which humans cannot move as in other mammals. As it is poorly developed, it is a vestigial organ.

Given alongside are two figures (A and B) representing the two stages of evolution of human beings. 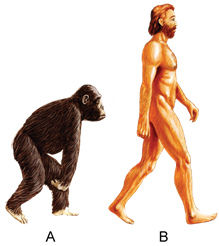 (a) Mention any two contrasting characters between the two stages.

(b) Write all the stages of human evolution in their correct sequence.

(c) State any two characteristic features of stage B.

(a) Contrasting characters between Australopithecus and  Homo sapiens sapiens:

(b) Stages of human evolution in their correct sequence:

• Bipedal locomotion with four reversed curves in the spine

Given alongside are two figures (A and B) showing a phenomenon that was first observed in Manchester before and after the year 1850.

(a) What name has been given to this phenomenon?

(b) Give the common name and the scientific name of the insect involved in this phenomenon.

(c) Briefly mention why the changes shown in the two figures appeared.

(d) The following phenomenon provides a classical explanation of a scientific theory given by a certain scientist. (i) Name and explain the said theory.

(ii) Give the name of the scientist who gave this theory.

(c) Reasons for changes in the two figures:

• After the Industrial Revolution, pollution resulted in a decline in the growth of lichens. The tree bark got exposed due to the absence of lichens. As a result, dark-coloured moths now got an advantage of a dark background, were camouflaged and survived, while the light-coloured moths were easily picked by predators.

• This showed that in a mixed population, those moths which could adapt to the changing environment after the Industrial Revolution survived and increased in number, while the ones which could not adapt were slowly wiped out from the population.