i. 'Robert Brown discovered the cell.' is not a correct statement.

Every animal or plant is made of many systems. Every system is made of many organs. Organs are made of many types of tissues, and tissues are made of many cells. A cell is an autonomous structure and is capable of carrying out various functions on its own. A cell can do all an organism can do. In a sense, the cell is full of life at the minutest possible level. Thus, a cell is called the basic unit of life.

Nuclear pores are the pores or perforations which occur at several places in the nuclear envelope.

i. They maintain the shape of the nucleus.

ii. These nuclear pores are the passages through which the movement of RNA and protein molecules takes place in both directions between the nucleus and the cytoplasm.

iii. They preserve the stability of genetic material by protecting it from respiratory breakdown which occurs in the cytoplasm.

The endomembrane system is an intercellular system which is concerned with the flow of materials from one part to the other with the help of vesicles. Components of the endomembrane system include endoplasmic reticulum, plasma membrane, Golgi apparatus, lysosomes and vacuoles. Each component is specialised to perform distinct functions. Lysosomes are specialised to perform the function of intracellular digestion, while vacuoles are meant for the storage of materials.

i. Nucleus: The nucleus is a double membrane structure which contains the genetic material. It is generally round or oval shaped. It has five parts - nuclear envelope, nucleoplasm, nuclear matrix, chromatin and nucleolus.

i. Nuclear envelope: The nucleus is bounded by a double membrane nuclear envelope with minute pores called nuclear pores in the membrane. The pores work like channels for the passage of substances into and outside the nucleus. The outer membrane is connected with the endoplasmic reticulum which also bears ribosomes on it.

iii. Chromatin: The chromatin is a fine network of thread-like structures found inside the nucleus. It contains DNA and some basic proteins called histones, some non-histone proteins and RNA. During cell division, chromatin fibres condense to form chromosomes.

iv. Nucleolus: It is a round, slightly irregular, naked structure attached to chromatin which synthesises ribosome subunits. It synthesises proteins. ii.  Centrosome: The centrosome is an organelle containing two cylindrical structures called centrioles. They are surrounded by amorphous pericentriolar materials. Both the centrioles in a centrosome lie perpendicular to each other in which each has an organisation like the cartwheel. They are made up of nine evenly spaced peripheral fibrils of tubulin protein. Each of the peripheral fibril is a triplet. The adjacent triplets are linked together. There is a proteinaceous hub in the central part of a centriole which is connected to the triplets via radial spokes. The centrosome plays an important role during cell division by organising the spindle fibres and astral rays. They form the basal body of cilia and flagella. 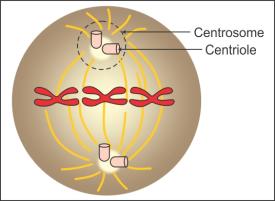 The centromere or primary constriction is a narrow lightly stained area of the chromosome where two chromatids are attached to each other.

Based on the position of the centromere, the chromosomes can be classified into four types - metacentric, submetacentric, acrocentric and telocentric. 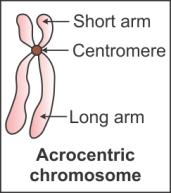 iv. Telocentric chromosome: It has a terminal centromere. 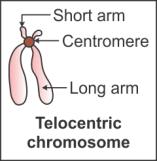 (c)   In prokaryotes, there are no membrane-bound organelles.

Neutral solutes are able to pass through the lipid bilayer of a plasma membrane as they are lipid soluble. The rate of movement depends on the concentration gradient and the lipid solubility of the neutral solutes. Polar molecules require special hydrophilic areas for their passage. They get transported by three types of transport mechanisms - ions, channels, permeases and active transport utilising ATP.

i. They are cylindrical shaped cell organelles which have finger-like folds in the inner membrane called cristae.

ii. Mitochondria are semi-autonomous due to the presence of their own DNA and ribosomes.

iii. They are the place for aerobic respiration. 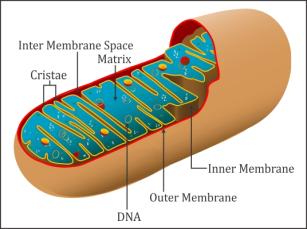 i. Chloroplasts are green-coloured plastids which are disc-shaped in higher plants and variously shaped in lower plants.

ii. Chloroplasts contain membrane-lined flattened sacs called thylakoids in their matrix. At places, the thylakoids are stacked and are called grana.

iii. They are responsible for converting light energy into chemical energy.

Division of labour is the differentiation of certain parts of the cell to carry out different functions for increased efficiency and higher survival. In unicellular organisms, a single cell performs all the metabolic activities. However, in multicellular organisms, distinct organs and organ systems carry out distinct metabolic activities. In the human body, there is a separate system to carry out functions such as digestion, respiration, excretion and locomotion. Even in a particular system, there are different organs for different functions. For example, in the digestive system, the teeth and mouth are responsible for mastication. The stomach is responsible for killing the bacteria in food. The small intestine is responsible for digestion and absorption.